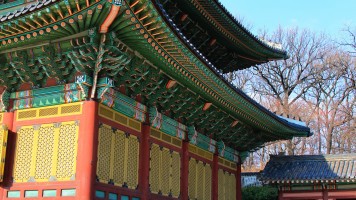 Changdeokgung Palace, Secret Garden and a view from Building 63

Next is a visit to Kim& Chang. Located in Insa-Dong, on the other side of the Han River, this huge company is Korea’s most well known and largest lawfirm with 1,100 employees. I was here 12 years ago in the middle of the heated patent battle between ASML of The Netherlands and Nikon of Japan where Kim & Chang acted as ASML counsel.

Before meeting K&C we visited City Hall in Jung District. Go up to the 9th floor to Sky Plaza to enjoy the city view. Seoul’s newly built City Hall was designed with two concepts in mind: “horizon” and “deep shadow”. Korea’s centuries-old house, known as “Hanok”, embody these concepts in the structure of their eaves. City Hall planners sought to invoke and re-interpret their beauty. The building is 13 floors high above ground and reaches 5 floors below ground. The former City Hall right in front of City Hall has been remade into Seoul Metropolitan Library. At Sky Plaza the Korean artist Mijin Jung her work “City Monster” depicting and interpreting modern contemporary buildings in Seoul.

Lunch at restaurant Dugahun at the entrance of Samchung-Dong Gallery was surprisingly western in a full Korean ambiance.