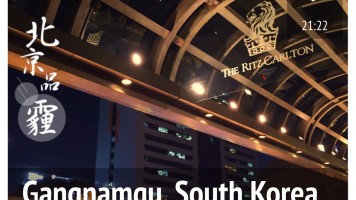 Starting at the Ritz Carlton in Gangnam. Going for the luxury travel.

You know about Gangnam Style, right?” asked the senior South Korean Google exec, when I found myself in Seoul two weeks ago – her first question. But, while the huge viral success of Psy’s hit has created a whole genre of jockey-based dance moves, Gangnam is a place, too.

It’s the Mayfair of Seoul, the high-rise district of the city just south of the river. Although it does feature one large and rather beautiful temple, Bongeun, for the most part, Gangnam is an upmarket shopping area, home to the enormous underground COEX mall (where part of the video was filmed) and the nearby boutique-lined streets of Apgujeong-dong. To see the historic Seoul, you have to cross the river, but that’s not the point of Gangnam.

Only the very wealthy can afford to live in Gangnam – not the kids in the latest styles who hang around its huge malls. As Psy says: “People who are actually from Gangnam never proclaim that they are.”

(Text from The Guardian)